Day Six at Ski for Light

Today was a free day and I chose to stay in Vernon to do my long walk to check out the town. On the map it didn’t look like there was much green space so I chose Kalamalka Lake as my destination point. What can I say about Vernon? There are lots of gas stations, practically one at each corner! Sidewalks would suddenly disappear.  When I finally got to the road that went to the lake, looking at my GPS I estimated I was one km from the lake.  Unfortunately the sidewalk disappeared and it was a narrow road with cars going fast.  I didn’t feel comfortable to walk it, so I had to turn around and walk back the ugly way I took to get there. Though I did walk through the downtown area which was nice.  The mountains surrounding the town are a pretty distraction from the unremarkable landscape of Vernon.  Quite the contrast from the week up in Sovereign Lake. 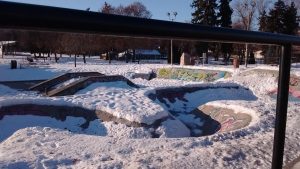 Another closed off park that was part of my walk. It had an arts centre and a skateboard park. 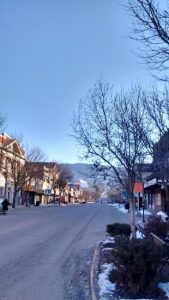 The nicest part of Vernon was downtown which is one street and it had no gas stations!

Tonight was also the banquet where the awards were given for the races.  Lots of people got all dressed up and made a big deal about it.  Chris got two medals for first place in the 10 and 5km races.  Both with times way ahead of the others. 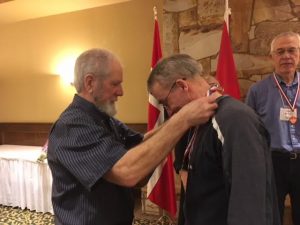 Chris getting his second award of the night.

Overall it was a great experience and I met so many special people that I hope to stay in touch with.  Heading out at 6:20am tomorrow.  Bye Ski for Light, it was a blast.