Last weekend, I ran my first official running race. I have been running 2-3 times a week for a few years, mostly because it’s the best time saving workout: just run outside your house! Last December while making my new fitness goal, I thought how nice it would be to join my partner and our friends pass the finish line at the annual St. Paddy’s Day Run for Achilles, so I signed up for the race.
My run workouts were always 30 minutes long and I usually did 4km. I always ran the same route, so I never really improved or had the desire to. After signing up for the race, I took my running more seriously. I tacked on that extra km, which added about 7 minutes to my workout.
Adjusting to the new distance didn’t take anything more out of me, the struggle I had was getting faster! I didn’t enter the race with a goal finish time, but I thought that cutting time out of my workouts would be a logical goal. I managed to get my 5km time down to 35minutes, and for yesterday’s race, I achieved 34:29. Here are some observations I made during my first experience at a running race.

1. I was lonely
I felt like even though I was running with people next to me all the time, I was isolated from them. Funny because I like solo workouts, but during the race I felt I wanted someone running along with me. It never occurred to me how much those cheerers along the route would help with that loneliness. Thank you for baring the cold, and motivating people!

2. Physical performance depends on the mind.
I often have some kind of soreness in my body, but it rarely disables me. I had achy joints on the morning of the race. During the run, various aches came and went, and it was bitterly cold. What stopped me from going into a walk the entire race was telling myself that I had done many 5km runs before; my body was strong enough to do it. I also felt grateful to be able to run, as there have been times in my life where I couldn’t.

3. A Mid-March run teaches you to face the elements.
After watching the race for the past 4 years, I know the weather is unpredictable. It can be extremely cold (like yesterday), warm and showers, windy. You name the extreme weather, and there’s been an Achilles race happening that day! Even so, year after year hundreds of runners face it. Once you’ve run in the extremes, you can face most things and enjoy outdoor workouts!

4. Achilles Canada is an awesome organization.
This race is the main fundraiser for the organization. I’ve seen participants with disabilities go from learning to run their first 5km to go on and do marathons. I’ve seen friendships built, trust and confidence go higher and opportunities where once there may have not been.For more information on Achilles Canada visit: http://www.achillescanada.ca/

5. No Pictures.
Since I didn’t tell many people I was racing, there are no photos of my run. In a time where social media defines our lives, to not have a picture pretty much means I never did the race.I’m okay with it. I don’t think it would have been a very flattering picture anyway, except for the look of satisfaction and relief as I crossed the finish-line. 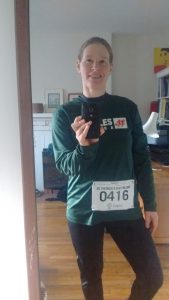 Before heading to the race. Could I have gotten a better number than 416?!