Woke up at 4:30am to catch a flight to Thunder Bay. Picked up the rental car and drove to Centennial Park for a short hike and lunch by the river (which I had made in Toronto). After the hike, we drove around and checked into our hotel. We walked to the mall near by which had a shuttle going to the waterfront for the Canada Day celebrations.
The opening act was Bollywood dancing! Not something I would have expected in Thunder Bay, a nice surprise. I was hungry and none of the food vendors had anything without sugar so we walked into the downtown. We stumbled on a roller skiing race not a usual sighting in Toronto but in Thunder Bay they have a strong nordic skiing community, making it a fun event to stumble across.
Picking a place to eat with many food restrictions becomes less of a complicated matter when you’re very hungry. The first place I saw open, we ate at. When we walked in, it was an empty nightclub, (even though the sign outside said Noodle Bowl). The owner assured us we were in a restaurant. The food was okay and filled me up. We spoke to the owner who told us he came 37 years ago as a refugee from Vietnam and opened this night club/noodle restaurant 30 years ago. How random to fall upon this place. After dinner we walked around the marina and passed a big Tai Chi group doing a demonstration. We were surprised with such a large Indigenous community that there was nothing traditional being performed at the Canada day festivities.
It’s an early night for us! 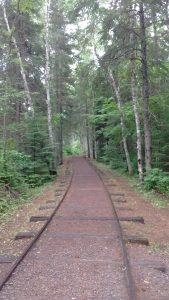