Another year, another year end tradition of going through cell phone photos and my calendar to remind myself what I did this year. Looks like there was a lot of work scheduled but the pictures remind me that I did make time for fun.

January
With a death of a friend at the end of 2016 and Trump’s win, I felt pretty sad going into this year.  But I kept doing things that kept me active and engaged.  I attended my fourth Park People summit because I needed as much of the good causes as I could get. 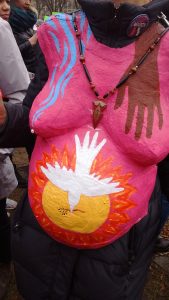 One of the many creative ideas at Women’s March

I, like many other women (and men) attended the Toronto women’s march.  I hadn’t been to a political march since high school so it was nice to re-experience that on such a large level.  My weekly long walks became my sanctuary as it always has, but the cold winter months are extra special. 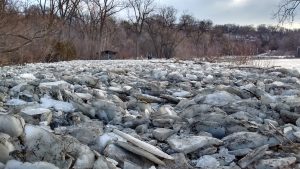 It was hard to pick just one winter walk photo, but this ice barrier along the Humber was the most memorable. (I did get through it!)

February
It was pretty exciting to attend the first orientation for York Recreation centre. I taught a couple of early morning bootcamp classes during the interim schedule.  It was a neighbourhood I wasn’t very familiar, was nice to get to know it better. While I loved the 7am time slot the location was a bit too out of my way to add to my regular schedule. 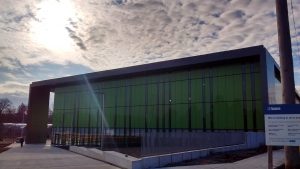 I made a point of making the most of weekends by seeing family, friends, exploring Toronto outdoors with my partner. 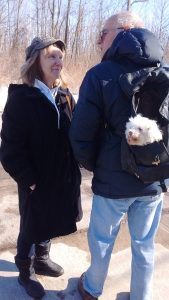 Parents and their weird dog near Lake Wilcox.

March
I participated in my first 5km race (which you can read about here). While it was an interesting experience I’m not much for exercising at events. I like to workout on my own terms, when and where I want to.  Though I will continue to cheer from the sidelines to my partner and friends running the race in 2018. 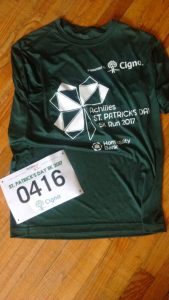 Achilles Run kit. 416 bib number how cool is that?

I tried as often as possible to immerse myself with music because I get so much pleasure from it.  I went to see some of my favourite classical pianists, the ballet, and even attended a private cello concert.  When the going gets rough, music makes everything soft again.
April
As soon as I found out the Tool Library/Sharing Depot was opening near by, I quickly signed up as a volunteer.  I am a Tool librarian one Sunday a month (all the time I’ve got to give lately!) which is fun because the awesome people at the Repair Cafe are there too. 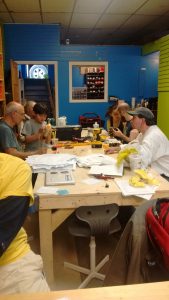 Repair Cafe at the Tool Library

I got my seedlings started and they took off.  I may have planted too much kale (is there such a thing?) I think I’ll diversify my greens next year.
May
In May there was more early morning walkers out to share the city with. Sometimes I joined them, like the bird watchers out by the lake.  I got out early to High Park during cherry blossom season. It was before 7am and there were at least 10 people already there! (I can’t imagine what later in the day was like!). 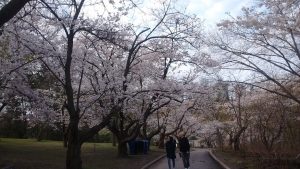 Cherry blossoms in High Park (at 7am) 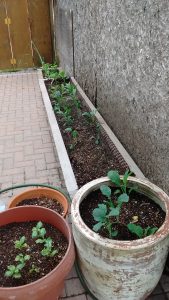 I led my tenth Jane’s Walk walking my favourite half marathon route.  I made the start time really early and the location not easily accessible and thought no one would show up but we had 4 at the start and 3 at the finish!
June
One of my closest friends had her birthday celebration at WaterStock. I hadn’t attended a music festival for a long time. It was a hot day but it was nice to hang out with fellow foodies and environmentalists away from the city. 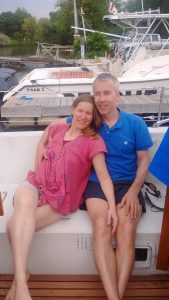 Lounging on the boat. Great place to be on hot summer days.

Another close friend bought a sail boat. I started swimming on Saturdays at Somerville pool in the beaches (the only outdoor pool in Toronto for serious swimmers). Then I’d walk over and lounge on the boat.
July
July was a busy month and not much of it spent in Toronto.  We went for a week to Thunder Bay visiting beautiful spots along Lake Superior.  I have such fond memories of this place. I would go back to Lake Superior in a second, there’s so much more I’d like to explore in that area. 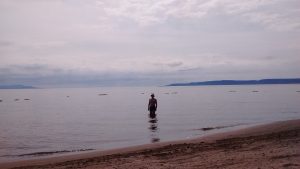 Chris going for a dip in Lake Superior. (brave soul)

The weekend after we got back we were off to Ottawa for my partner’s aunt memorial.  She had died in the winter after a long 5 years in a vegetative state. Relatives from all over Canada and Europe came to celebrate the life of this amazing woman.  I wish I had gotten to know her but I’ve been lucky to know the amazing children and grandchildren she raised. 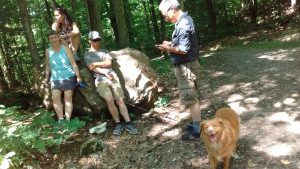 Hike in Gatineau with Chris’s cousins.

August
Normally in August we get to the cottage on the weekends but my partner was immersed in a complicated roof project that went into mid October!  I played the supportive wife and attended to the garden and did my own projects, but it did have its frustrating moments.  I attended the annual fitness conference for the first time in 4-5 years. I blogged about that too.
September
I took my birthday off to spend a few days at Point Pelee national park but because of the roofing project fiasco, I thought it would be best to stay in town.  My partner took the day off for my birthday and we had fun in Toronto.  We went down to Guildwood park, what a Toronto gem! We walked from there down to the beach and up the Doris McCarthy trail (1 km incline). After we went to the Toronto Archives, another Toronto spot I’d never been to, and spent a few hours researching our house.  As I do every birthday, I unplugged from all communication. The next day I realized how much happier I was without social media in my life. I decided to continue this by giving up on Facebook. It has never served me well and I get frustrated with the timeline and seeing posts I have no interests in seeing. Even though I’m still on Twitter and Instagram, I try not to spend much time on social media.  In the future I may consider what I can get out of social media but for now, my priorities are in the real world.  I am aware this disappoints anyone I meet under 30. 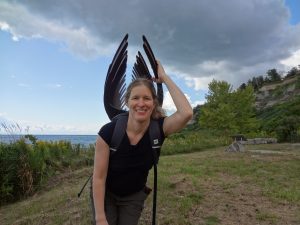 At the bottom of Doris Mccarthy trail on my birthday.

I got to see the salmon swim upstream. It was a late season for them and as always the early bird gets the worm (or the Humber river to herself), I was the first to see nature’s magic! 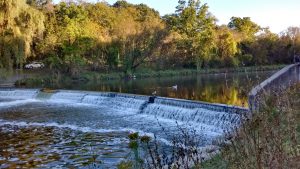 On Sept 18th I chopped off all my hair and haven’t looked back.  I feel more like an adult now and get nothing but compliments on the new look.
October
My partner’s birthday was on the 13th but we didn’t plan anything because the roofing project had just finished. On the morning of we took the Go train to Burlington.  I hadn’t been there since I had a short term job in 2000.  Because it was my partner’s birthday (and only because it’s a birthday)  I went to Ikea to get items for another house repair. Big box stores suck the energy right out of me. 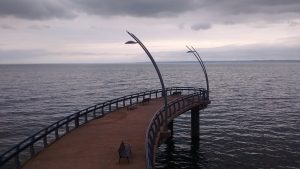 I had to miss out on the annual closing the cottage because I threw out my back but having the whole weekend to myself for the first time in months was all I needed to get my body back to functioning.
November
I had more concerts in November.  I got to see the sold out show of Angela Hewitt because a spare ticket from a friend came up.  That was a treat to see some a talented pianist with years of experience.  Inspiring, and I’ve been taking my piano study in a new direction now that my 86 year old piano teacher’s health has declined.  I miss the RCM way of learning but am trying to be open to new ways to experience this beautiful instrument. 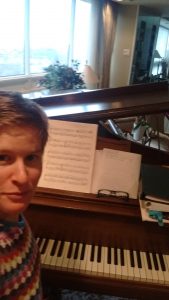 Practicing on an very old Steinway Grand Piano. What a beautiful sound!

I had a handful of new clients come in all with different needs and schedules.  It was a busy month trying to fit them around other regular work commitments.
December
I was pretty excited about the new subway opening on the 17th.  I got off at York University and explored the campus I had graduated from over 20 years ago.  Barely recognize it now!
My parents gave me back the menorah I made them in high school and I actually lite the Hanukkah candles for all 8 nights.
One of the housemates is a trumpet player. She brought over her trumpet friends to give us a concert because she felt bad for the hours of practice we have to listen to, but I actually really like it. The concert was a lot of fun, they pulled out their flugelhorns and there was a tuba player too.  Solstice was a nice gathering and being around my lovely friends and neighbours lifts my spirits that were down on the days approaching solstice. 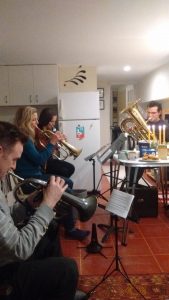 For Christmas we went to my partner’s cousins in Peterborough and got to ski at their club, Kawartha Nordic, in beautiful snow.  It was so nice to have a white Christmas.  One of the cousins (once removed) brought home beluga whale from Inuvik where she’s been working. The small sample was tasty and it was interesting to hear stories about life up North.
Those were some of my highlights of 2017.  I made a lot of decisions and goals that I believe will have a positive impact on my life in the near future. In 2017 I had more days then usual where I wasn’t happy to go to work.  Sometimes I thought about changing my career but as it was often mood related, I’d go back to appreciating the positive impact I have on people’s lives because of fitness. I’ll keep a closer eye on my career happiness in 2018 though. I managed to not get sick (cold/flu or worse) for the whole 2017! I’m hoping the good health continues into 2018.
Happy New year all my blog readers!